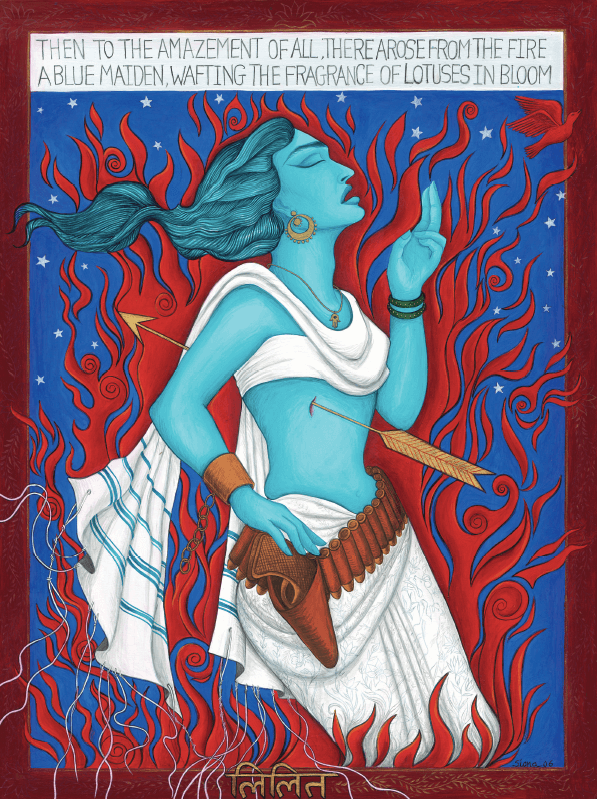 I am a Bene Israel Jew originally from India, now living in the United States since 1986. My multimedia work translates into several different media, including mosaics, scrolls, and most often paintings. All my work refl ects my background of being brought up Jewish in a predominantly Hindu and Muslim India. In my paintings I combine the imagery of my past with the role I play in America today, inspired by Indian/ Persian miniature paintings, medieval illuminated manuscripts, pop art, comic books, Sephardic icons, and the current sociopolitical climate, as a means to explore the cultural boundary zones of my immigrant self. I have been studying the Torah (fi ve books of Moses) and midrash (rabbinical interpretations) with rabbis and on my own for seventeen years. The fi gures from these holy texts have thus become fi gures in my paintings that act out their parts—recording, balancing, rectifying, restoring, and absorbing. It is through this multilayered research and recycled mythology that I can dip into my own personal specifi cs and universalize, thus playing the role of an artist/activist.

Very often I look down at my skin and it has turned blue. It tends to do that when I face certain situations of people stereotyping and categorizing those who are unlike themselves.

Very often I look down at my skin and it has turned blue. It tends to do that when I face certain situations of people stereotyping and categorizing those who are unlike themselves. Therefore, over the years I have developed many blue-skinned fi gures in my paintings. This blue self-portrait of sorts takes on many roles and forms, through which I theatrically explore ancient and contemporary dilemmas. I am also inspired by Indian goddesses like Kali and the famous blue god Krishna. I show how these fi gures use their blue skin to tell (or mostly retell) stories. In this process of recycling and rejuvenating, they merely remind me in making the work (and hopefully my audience in viewing the work) that mythmaking is cyclical and timeless. Thus, blue skin has become a symbol for me of the color of the sky and the ocean, of belonging everywhere and nowhere and of being a Jewish woman of color. My series Fereshteh (“angels” in Urdu)—which I have been working on since the early 2000s and continue to this day—explores the women of the Bible and brings them forward to combat the wars and violence of today vis-à-vis midrash (interpretation) in my intricate paintings. Currently, there are eighty-two paintings in the Fereshteh series. The eightieth painting is called Finding Home #80 (Fereshteh) Lilith. Lilith’s name is written in Hindi at the base of the painting.

Also by the iconography of Saint Sebastian

Shanta is peace and Masuma is innocence in Sanskrit and Urdu, respectively

Telltale symbols cannot decide where she should belong

A stigmata, a sign for the holy trinity; the hand of Fatima, the daughter of the Islamic prophet Mohammad; a tallit, a Jewish prayer shawl; and the white worn by widows in India

The imprisoned hand sometimes reaches for the gun

Suffering does not necessarily teach us the rules of humanity

Swathed in the dignity of her red, white, and blue

Lilith urges you to think again

Of another skin, another time, another fragrance, another renaissance. 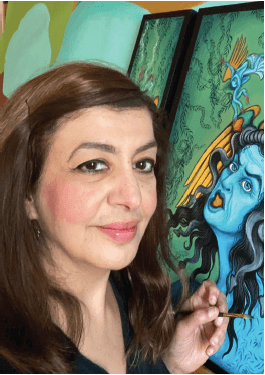 SIONA BENJAMIN is a painter from Mumbai, now living in the US. Her work reflects her background of being brought up Jewish in Hindu and Muslim India. She was awarded two Fulbright Fellowships to India and Israel. Website: https://artsiona.com