Laughter may be the best medicine, but is it the best engine for justice? Does the fact that humor is seen by many to be, by its nature, silly or frivolous render it a poor choice for trying to advance progressive political positions? History would seem to argue that humor has, in fact, long been seen as an excellent way to push progressive narratives against the hegemony. From the comedies of Aristophanes and the political graffiti of Pompeii we know that people have been making fun of governmental and civic leaders since, well, forever. Satire aimed at pushing the audience toward a more just world is as old as satire itself. Political humor has been and remains a major way that many people engage with American political life. As many people cite The Daily Show as their primary news source as cite USA Today,i and among younger people upward of a quarter say that shows like The Daily Show or Last Week Tonight with John Oliver are their primary news source.ii Despite winning multiple Peabody Awards, The Daily Show never claimed to be journalism and Jon Stewart (and Trevor Noah after him) always made a point of reminding viewers that they were not news anchors, which implies that they feel their interest is not in being impartial, but in exposing the ridiculous wherever they find it.

If comedy news programs are not bound by journalistic integrity, comedians are even less required or expected to present any sort of “fair and balanced” approach to politics, current events, or news stories. Comedians exist to push boundaries and speak uncomfortable truths. Sometimes those truths land, sometimes they don’t, but the risk of failing at being funny has not stopped some politically minded comedians, including some very high-profile ones, from continuing to express their critiques of American culture and politics through their comedy. Jewish comedians in the first half of the twentieth century occupied a sort of liminal space in which they could make critiques of perceived American injustices based on being not quite part of the hegemony. As Jews have become less and less minoritized in the United States their political comedy has become that of insiders. They are part of the American social fabric and critique the government and American policies from within the system. One could argue that Jewish comedians shifted from “this doesn’t apply to me so I can get away with saying it” to “this applies to me, so I am allowed to say it.” This sense of “I can say that about my folks, but you can’t” is seemingly instinctive, and Freud devoted significant portions of Jokes and Their Relation to the Unconscious to it. The exact same joke can be fine, or offensive, based entirely on who is telling it and who is hearing it. If it’s “just us” in the room there are often different limitations on satire and critique.

This insider/outsider dichotomy is very apparent in the way that two contemporary comedians approached comedy and injustice in Trump-era America. From 2017–2019 Sarah Silverman produced and starred in I Love You, America with Sarah Silverman. Silverman is a notably left-wing figure who supported Bernie Sanders in both the 2016 and 2020 presidential elections and the show was premised on her desire to go meet Americans who politically disagreed with her. In the first episode, for example, she visits with a Republican family in Louisiana. On subsequent episodes she visited other conservative states, met with a doomsday prepper, talked to an anti-choice group, refereed a game of HORSE with leaders of different religious groups, and even went on a blind date with a self-described conservative.

The show, unsurprisingly, retained Silverman’s left-wing sensibilities; while she traveled the country to encounter and speak with Americans who were unlike her, nearly all of her in-studio guests were liberal political figures. One could certainly argue there was a voyeuristic quality to the show that treated both conservative people and conservative areas of the country as exotic. The show could function almost like a zoo in which politically liberal Americans get to observe their conservative counterparts from the safety of their living room, but Silverman approached the project with a sense of honest—if sometimes naïve appearing—interest in engaging with people. The very title of the show expresses her sincere sense that through comedy and personal interaction she could help heal rifts in the country she loves.

Sasha Baron Cohen’s Who Is America bears many superficial similarities to Silverman’s show, and yet could not be more different. Baron Cohen was already well known in his native Great Britain when he achieved breakout success in the United States with his film Borat. Baron Cohen’s shtick was to assume various alter egos, interact with people, and get them to express views that could be filmed and presented for comedic effect. After the immense success of Borat some speculated that he could not continue his guerilla comedy as people would recognize him or realize they were being led to make themselves look ridiculous, but there seems to be an inexhaustible quantity of people who can be guided (sometimes with extraordinarily little apparent effort) to express outrageous things.

Who Is America aired in 2018, concurrent with Silverman’s show. Baron Cohen played several different characters, from a far-right conspiracy theorist to a far-left academic, interacting with people and filming their reactions to his over-the-top characters. The character of Erran Morad became a particular lighting rod as some felt those segments vindicated liberal distrust of conservatives while others saw them as smug liberal manipulation of their political rivals. Morad was an alleged former member of Mossad and he visited American leaders to teach them about fictitious Israeli defense programs. He got American politicians to go on record supporting everything from profiling women in burqas to the “Kinderguardian” program in which children as young as five would be trained to carry firearms in the classroom.

Both shows use the injustices and widening political divisions of the Trump-era United States to generate humor, but where Silverman approached this with a goal of healing and reconciliation, Baron Cohen shone a light on some of the darkest corners of American social and political ideologies. Baron Cohen, who is not American, approached American political divisions with none of Silverman’s love or attempts at equanimity. Silverman tried to use humor to humanize the political other while Baron Cohen went full bore on getting them to unmask or even incriminate themselves. Both shows succeeded in finding humor while highlighting American injustices and also demonstrated how different these sorts of critiques look when performed by people with or without a stake in the issue. Whether or not this type of political humor is effective is hard to gauge; the audience is self-selecting so there is a high probability that these shows end up “preaching to the choir,” so to speak. Nevertheless, the high visibility of comedians like Silverman and Baron Cohen means that their platforms are large, and merely putting their attempt at progressive ideals out into the world in such a public manner can only be seen as a viable way of advancing the cause of justice. 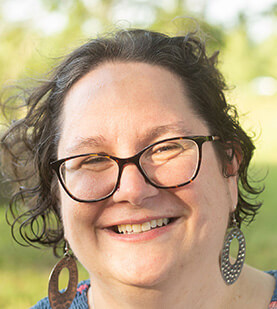 JENNIFER CAPLAN is assistant professor and The Jewish Foundation of Cincinnati Chair in Judaic Studies at The University of Cincinnati. Her book Funny, You Don’t Look Funny: Judaism and Humor from The Silent Generation to Millennials will be published by Wayne State University Press in March 2023.