If, for millennia, the Jewish discourse of justice focused on powerlessness as a source of action and ethics for intercultural engagement, the most urgent discussion of Jewish justice today needs to grapple with Jewish power and violence. Justice within a Jewish prism, not unlike other contexts, conjures up contested terms: I will focus on peace, democracy, and restorative accountability for past injustice as a pathway for justice-oriented futures.

The realities of Israel, including its transnational discursive Hasbarah (or public diplomacy), which makes it increasingly difficult to differentiate between Zionism and Judaism, have introduced an ahistorical attitude toward the praxis of Jewish justice. By “ahistorical,” I refer to two interrelated moves. First, antisemitism is foregrounded as an ontological condition, or what Shaul Magid refers to as “Judeo-pessimism,”i a conception of the hatred against Jews as inscribed in the nature of being, requiring a relentless Manichaean discourse of “self-defense” or an apocalyptic showdown. Relatedly, the events around the Shoah are read as both proof of Judeo-pessimism and as a redemptive script whereby the establishment of Israel itself constitutes the unfolding of justice in the aftermath of near total annihilation. Now, “never again” would Jews be subject to the genocidal outcome of ontologically inscribed antisemitism. These two discursive moves then function to deny the justice demands of Palestinians on the back of whom Jewish “redemption” from the ashes of Europe occurred. The two moves, interwoven with biblical warrants, have underpinned the denial of Palestinian narrativesii by spinning a history of Palestinian displacement and elimination as “self-defense.”

History is erased when the Jew-qua-victim is interpreted as an essence (always a victim or potentially one unless fully militarized) and not as a product of elastic sets of historical and cultural constellations. Yes, the Jew in Hitler’s Germany was a victim. She is not a victim in Israel today. (Even the most marginalized Israeli Jew inhabits a privileged position vis-à-vis Palestinians.) History ends when the present moment is interpreted through end-time scenarios, which authorize the suspension of ordinary (historical) morality. Likewise (and treading on Orientalist tropes), the ontological and ahistorical discourse of “self-defense” means that the image of the Palestinian morphs into an Amalek against whom revenge and sheer force become the only “justified” mechanisms to ensure Jewish “redemption” or safety/security. This is an ahistorical and ontological move that posits the Palestinian as the enemy of Jewish safety. Hence, a theo-ontological and ahistorical sense of Jewish insecurity sanctions the security state with its exportable necropolitical instruments of surveillance and domination.iii This discursive ahistoricity denies Palestinian lives and aspirations, thus constituting a form of injustice. For a contemporary interpretation of justice within a Jewish framework, the rhetorical ahistorical spin must be unspun.

When Israel claims that it is justified to dispossess Palestinians from their homes or “bomb Gaza back to the stone age” (as Benny Gantz infamously boasted),iv the logic of Hasbarah is one of self-defense and/or biblical and political entitlement. Violence is “just” because Israel’s safety (and redemption) is purportedly at stake. However, justice, of course, is not a self-evident concept but rather a praxis that requires a deep pluralistic ethos of human dignity and worth. Justice as a historical praxis must be robustly secular and political. A “justice” that values the blood of one group over another is no justice at all, even if members of such supremacist groups interpret their struggles as justified. This is where the spin of self-defense not only transvalues offense as a defense, but also obscures the underlying crime of settler colonial dispossession.

Justice is antithetical to the Oslo peace frame. Recent evidence-based reports by esteemed human rights organizationsv demonstrated what many Palestinians have decried for decades: the entirety of the geopolitical space from the River Jordan to the Mediterranean Sea reveals that Israel commits the crime of apartheid, a comparative category in international law. These reports expose both the illusion and delusion of the Oslo paradigm and the profundity of injustice that its segregationist peace formula has concealed. At the heart of this injustice is the exclusionary character of “proper Israel,” especially codified in the Nation-State Law of 2018, which enshrines a commitment to Jewish supremacy and thus signals the relinquishing of the delusion of “democracy.” Further pivotal to the injustice of the Oslo frame is the lack of acknowledgment of the Nakba. Hence, in the context of Jewish Zionist discourse, both “peace” and “democracy” have been exposed as ethnoreligious-centric and thus as unjust concepts concealing historical and ongoing injustices. The justness of these concepts, however, can be reconfigured through a praxis of restorative justice, which ought to be historically accountable and relational.

It is not acceptable to talk about justice through a Jewish Studies lens without talking about Palestinians and their experiences of displacement and depopulation.vi A relational prism that centers Palestinians and other victims of modern Jewish history, including Mizrahi and Ethiopian Israeli Jews, illuminates a restorative justice approach generative of intersectional solidarity transgressing ethnoreligious national walls. Acknowledging harm done and imagining mechanisms of repair constitute a deeply historical and relational justice praxis demanded by empirical realities.

Judith Butler’s insistence on dismantling Zionism as a precondition for a Jewish praxis of justice exemplifies the principle of relationality central to restorative justice approaches.vii However, Butler remains ahistorical and Eurocentric by insisting on finding keys for reclaimed Jewish (diasporic) ethics of alterity primarily in the, German Jewish canon (Hannah Arendt, Emmanuel Levinas, Martin Buber, and others). While these intellectual giants are worthy interlocutors, conversing only with them stops the clock around 1948. Imagining restorative futures in the land cannot simply rely on what German Jews theorized at one point in time. Nor can it rely on reclaiming the diasporic or the “prophetic tradition” as most “authentically” Jewish, thereby diminishing the history of Israeli Jews.

More historically, sociologically, and politically attuned sites of relational justice can only be found in Palestine/Israel where, for example, people like the Iranian-born journalist, translator, and political activist Orly Noy joined the Palestinian-Israeli political party Balad, which envisions the space through secular and democratic prisms. For Noy, Balad’s vision will not only redress harm done to Palestinians, but will also enable her to become a Jewish native of the MENA region again by liberating her from a (settler) colonial identity into which she was assimilated upon immigration to Israel in 1979.

To conclude, justice within a Jewish frame needs to interrogate historically the Zionization of Jewishness through ahistorical claims of victimhood (ontological insecurity), expose the discursive mechanisms whereby aggressions are spun as self-defense, and acknowledge historical injustices and their ongoing legacies. Only upon disentangling Jewishness from the “realist” logic of state power and violence can justice be rearticulated through a restorative Jewish prism. 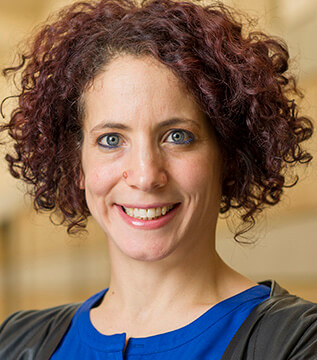 ATALIA OMER is professor of Religion, Conflict, and Peace Studies at the Kroc Institute for International Peace Studies and at the Keough School of Global Affairs at the University of Notre Dame. She is also Dermot T. J. Dunphy Visiting Professor of Religion, Violence, and Peace Building at Harvard University; senior fellow at the Religion, Conflict, and Peace Initiative at Harvard Divinity School’s Religion and Public Life program; and codirector of Contending Modernities, a global research initiative focusing on the study of religion and modernity. Omer was awarded an Andrew Carnegie Fellowship in 2017 to complete Decolonizing Religion and Peacebuilding (forthcoming from Oxford University Press).

ii See, for example, Saree Makdisi, Tolerance Is a Wasteland: Palestine and the Culture of Denial (Oakland: University of California Press, 2022).

v For example, B’Tselem, “A Regime of Jewish Supremacy from the Jordan River to the Mediterranean Sea: This Is Apartheid,” January 12, 2021, http://www.btselem.org/publications/fulltext/202101_this_is_ apartheid.