Reading Jewish Texts in an Age of Climate Change

Can ancient Jewish texts help us grapple with climate change? Spiritual leaders often look to sacred texts to make a compelling case for the power of religion to reshape our environmental consciousness, to catalyze new forms of ecological practice. As a scholar of rabbinic literature, I’ve written about biblical and rabbinic texts that are suffused with ecological concern: for the coming of the rain and the nurture of soil, for the sowing of seed and the rhythms of harvest, for the tending of goats and the health of the herds. Rabbinic Jews faced their share of environmental challenges. While drought and rain crisis loom largest in my own work, rabbinic sources speak to a wide range of concerns we recognize today as central to environmental justice: concerns about trash and toilets, about waste and water; about the differential impact that mining, tanning, and industry have upon vulnerable human and animal bodies; about the poisons that spread so easily in the air we breathe.

Rabbinic Jewish stories grapple with power in ways that I find deeply resonant for the present moment.

These sources matter to me, as a Jew and as an activist. But I confess, I’m not convinced that Jewish tradition offers us a pragmatic blueprint for effective environmental action in the Anthropocene. The classical sources could not anticipate the scale and scope of the current crisis, or foresee that human action would affect ecological systems in such a comprehensive and catastrophic way. Rabbinic legal paradigms emerge within a vastly different political economy, and the means through which they negotiate conflicts rarely translate in straightforward ways to an intensely globalized world. While traditional Jewish law and liturgy can offer some significant resources for more sustainable choices, I find myself frustrated by the limits baked into these paradigms, by commitments they hold that I myself do not share. My own instincts align with the insights of Mara Benjamin, who argues that Jewish theology needs a deep revision in order to speak to our contemporary climate emergency—that we must let go of our tendency to want to keep human concern and human desire at the center of Jewish prayer, Jewish thought, Jewish ethics.i

Across the Jewish world today, there are potent clusters of Jewish eco-practitioners revivifying ancient Jewish practices as a way to ground and sanctify their environmental commitments, from traditional practices for farming and raising animals to new-old ways of honoring Jewish holidays and celebrating the seasons. This is powerful work, work that speaks to my own heart. But I also know this: Jewish ritual creativity isn’t singlehandedly able to transform the raw politics of the present. It’s not just about the numbers. It’s also about the power most of us modern souls are prepared to grant religious values. To speak in moral language today is to speak most powerfully to those who already hear the call. A Jewish case for solar power seems unlikely to sway the hearts of Jews who profit from fossil fuel industries, from Jews invested in the status quo.

What draws me most to Jewish tradition is the way it can aid us in doing the inner work that climate change demands. Rabbinic Jewish stories in particular grapple with power in ways that I find deeply resonant for the present moment: with the long, complex legacies of empire and exile, with the ravages of political conquest and the lash of despair. Because these stories are often self-critical, because the rabbis often tell these stories in ways that lay plain their own faults and failings, I find them a powerful, if oblique mirror for examining the chasms that confront us today. I lay them out as an invitation: to think more deeply about the social and political effects of climate change, to confront the problems of power and privilege that contour our world and intensify climate inequity. Through the telling, I hope we find companionship for grappling more forthrightly with fear and loss and guilt and pain.

May I tell you a story?

It’s a story from the Babylonian Talmud, a story that unfolds after the destruction of the Temple, during the Roman occupation of Judea. One day, while Roman soldiers stalked the streets, they saw a crowd gather for a wedding feast—and they mistook it for an uprising, a great Jewish rebellion. They tell their commander, who tells his commander, who reports rebellion all the way up the line. Caesar arrives with the full force of his army, ready to put down the revolt of the Jews.

As the talmudic story unfolds, it telescopes the conflict between Rome and the Jews to a battle between two men. Bar Droma, the Jewish hero, summons miraculous strength and very nearly defeats Caesar’s vast army. Caesar withdraws and the Jews rejoice with extravagant feasting and celebration. The Talmud says, They ate and they drank and they lit lamps so abundant “that the seal of a signet ring could be seen at a great distance” (B. Gittin 57a). The opulent feast leads Caesar to revoke his decision. He feels the Jews are rejoicing too greatly, and he returns to annihilate them. The story closes with Rav Ashi’s words:

Three hundred thousand swordsmen
ascended Tur Malka
and they slaughtered them there
for three days and three nights—
while on the other side of the mountain,
they celebrated and made merry,
and one side did not know about the other.

The conclusion of the Tur Malka tale gives chilling voice to the moral problem of opulence and ignorance. The revelers at that great party know nothing of the death unfolding just beyond their borders. Caught up in the extravagant celebration, half the people of Tur Malka feast in the midst of disaster—unaware of the slaughter on the other side of the mountain.

In a theme that recurs in many talmudic stories about disaster, the rabbis critique the luxury of the feast, the extravagance of the celebration. The story lingers on the lavish lights that illuminate the celebration, so bright you could see the details of a signet ring. Retelling this tale, I think always of the words of Arundhati Roy, as she describes the way that violence in so many communities is silenced and unseen. Roy says, “I think of globalization like a light which shines brighter and brighter on a few people and the rest are in darkness, wiped out. They simply can’t be seen.”ii In Rav Ashi’s words: “One side did not know about the other.”

This is the story I think of when I think of my own place in the global ecology of climate change. This is the mountain in our midst. This is one measure of the mirror I find, when I look to ancient Jewish tradition: a mirror that can help me ground my heart in a difficult but necessary truth. I am a white, well-off woman whose life is lit with a whole lot of light. I’m one of the revelers in the Talmud’s story. I’m one of the ones who eats and drinks and does not count the cost.

As a scholar, ethicist, and spiritual teacher, one of my core commitments is to help communities of relative privilege reckon more deeply with the disparities of power that shape our world. I want us to grapple with the ways we get disconnected from the realities of climate change, the ways we turn away from violence. I want us to interrogate the systems that constrain us, so we begin to dismantle the unjust patterns in which we are enmeshed. I want to help us tune our attention to a hard truth of the present moment: that environmental harm is unevenly distributed. All of us are in danger, but some us live much closer to the storm. I will not speak in platitudes. I will not sell hope cheaply, like a storybook promise or a thin nostalgic fantasy. I find in ancient Jewish stories a different kind of solace: a reminder that we are neither the first nor the last to come face to face with moral failing. We are not the first to take up the work of confronting our own complicity, not the first to take up the task of stitching life anew amid a ravaged world. 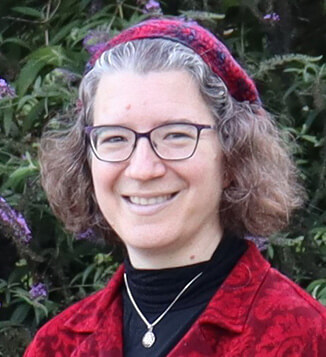 JULIA WATTS BELSER (she/her) is professor of Jewish Studies in the Department of Theology and Religious Studies at Georgetown University, as well as senior research fellow at the Berkley Center for Religion, Peace, and World Affairs. Her most recent scholarly book is Rabbinic Tales of Destruction: Gender, Sex, and Disability in the Ruins of Jerusalem (Oxford University Press, 2018). A rabbi, activist, and longtime advocate for disability and gender justice, she currently directs an initiative on disability and climate change at Georgetown University—and she’s a passionate wheelchair hiker.